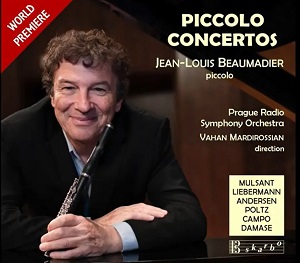 Jean-Louis Beaumadier has done more than anyone to advance the piccolo as a solo instrument, having toured on four continents, unearthed a trove of repertoire from the “Belle Époque” or Golden Age of the piccolo, commissioned new works, edited a series of piccolo publications, and recorded 20 CDs. His latest, Piccolo Concertos, is his first collection of concertos with full symphony orchestra, many of them written for him and recorded for the first time. Beaumadier studied with Jean-Pierre Rampal at the Paris Conservatory and then performed for 12 years as solo piccolist in the Orchestra National de France. Until recently, he was professor of flute at the Marseille Conservatory.His playing is always stylish and expressive, with great tonal beauty and flexibility, remarkable control of dynamics including astonishing pianissimo in the high register, and virtuosic fluency . The Prague Radio Symphony Orchestra conducted by Vahan Mardirossian is first-rate, and the sound quality and balance of the CD is perfect.The most engaging performance is of Jean-Michel Damase’s Concerto for Piccolo and Orchestra, his last completed work. Damase (1926–2013) is well known to flutists for several charming solo and chamber works. His style, reminiscent of Jean Françaix, Jacques Ibert, and Francis Poulenc, is lighthearted and witty, with a sophisticated sensitivity to instrumental color. This concerto is dedicated to Beaumadier; his American premier at the 2017 NFA Convention in Minneapolis was memorable. The work is cast in three movements. The first alternates between lyricism and playful banter between soloist and orchestra; the second rivals the slow movement of Poulenc’s Flute Sonata in melodic beauty; and the brief finale returns to a whimsical mood.Florentine Mulsant (b. 1962) studied composition at the Paris Conservatory and the Schola Cantorum in Paris . Her Concerto for Piccolo and Orchestra, op. 72 (2017), written for Beaumadier, features close collaboration between soloist and orchestra in its dreamy and melodic first movement and mischievous second movement. The harmonic language resembles Arthur Honegger or early Henri Dutilleux. The score is now available with a piano reduction and promises to become a frequent recital work.Pianist and composer Véronique Poltz tours with Beaumadier. She studied at the Paris Conservatory and the École Normale de Musique in Paris and teaches at the Marseille Conservatory. Her two-movement “Kilumac” Concertino, op. 36 for piccolo and orchestra is the perfect celebratory vehicle for Beaumadier. The title is a combination of letters from the names of her daughter and son-in-law, used as a collection of pitches in German notenames, and the piece illustrates the budding relationship and wedding of the couple. It is a coup for Beaumadier to obtain a commission from Régis Campo (b. 1968), one of France’s most successful composers with more than 200 vocal, instrumental, and dramatic works. He has previously written an attractive flute concerto, “La Tempesta.” His new concerto, Touch the Sky (2019), inspired by a view from an airplane window, is a colorful work in four movements, with a style akin to post-minimalism. Lowell Liebermann’s Concerto for Piccolo and Orchestra, op. 50(1996) holds a firm place in the repertoire and has previously been recorded by both Sir James Galway and Nicola Mazzanti. Beaumadier captures the great expressive range of this substantial work from the sublime to the comedic. Joachim Andersen’s Moto Perpetuo, op. 8 was originally written for flute and piano and dedicated to Paul Taffanel. Andersen scholar Kyle Dzapo discovered a manuscript in New York containing hints at orchestration, which forms the basis of Véronique Poltz’s arrangement for piccolo and orchestra. Beaumadier flaunts fluid articulation in this performance.Lionel Pons, professor of music history and analysis at the Marseille Conservatory, provides informative liner notes.
Leonard Garrison NFA

…One selection actually dates from the mid-19th Century. The Danish flutist, composer, and conductor (Carl) Joachim Andersen wrote his character piece Perpetual Motion for flute and piano in 1869 with indications for an orchestration he would never undertake. Beaumadier had Veronique Poltz (b 1963) carry it out and first played it in 2009. Her short piece was then written for him in 2018. The title is a neologism created from the names of her daughter and son-inlaw. Regis Campo’s Touch the Sky was composed in 2019 and is dedicated to painter Patricia Kinard (b 1949). The writing is more about textures than anything else, and the tonal language keeps it all sounding very pleasant. It is certainly not a traditional display piece for a soloist. In four brief movements, it is about the same duration as the two movements that compose Florentine Mulsant’s concerto from 2017. In a thoroughly contemporary language, a slow movement that is partly cadenza introduces a fast movement of equal length with a dreamy central slow section that leads to a cadenza. Lowell Liebermann’s Piccolo Concerto has been recorded before, so although it’s the largest and most significant contribution to the repertory by far, the real discovery here is the concerto Beaumadier commissioned from Jean-Michel Damase before he died in 2013. Written in the three standard movements, it is his last piece. One of the themes came from his opera Columba first performed in 1961. Anyone who already knows his thoroughly French and accessible style knows what to expect. This is an enjoyable program played skillfully and sensitively by Beaumadier. Balance with the orchestra is just fine, and the Liebermann is a magisterial performance. © 2020 American Record Guide

Piccolo virtuoso Jean-Louis Beaumadier has released his tour-de-force album of piccolo concertos with the Prague Radio Symphony Orchestra, Vahan Mardirossian, conductor. This is the first ever album devoted entirely to piccolo concertos, and it is an important step in the continuing recognition and transformation of the piccolo.

Most of the works are by contemporary and 20th century composers, but included is a surprise, a concerto, ‘Molto Perpetuo’ by Carl Joachim Anderson (1847-1909). Flutist Kyle Dzapo found the score of the piece, with just a few orchestration suggestions, and Beaumadier invited composer Veronique Poltz to create the excellent orchestrations, brilliantly played by Beaumadier, whew!! Her concertino ‘Kilumac’ opus 36, (2018) is also included on the album.

The other works on the program are Florentine Mulsant’s Concerto for Piccolo and Orchestra, Lowell Liebermanns, beautiful and thrilling Concerto opus 50, Touch of the Sky by Regis Campo, an evocative, colorful work inspired by looking through the window of an airplane, and the last completed work by the important French composer Jean-Michel Damase (1928-2013). This concerto was written for and dedicated to Jean-Louis who premiered it posthumously. It’s a lyrical and humorous piece, representative of Damase’s unique style, and I hope it becomes a staple of our repertoire for piccolo.

Throughout the album Beaumadier performs to perfection, always with complete understanding of the composers intent and adding his own interpretation, joy and virtuosity. A wonderful album to explore the range and possibilities of the piccolo.